They said you had Autism
This is a lifelong disorder you can never overcome
You were “disconnected”...
I could only see …the light in your eyes

They said you would never speak
Or go to school like other kids
You would not have friends to play with
I could only feel ....the love in your heart

They complained that you were hyperactive
You were difficult to handle
You need to be restrained and drugged for your aggression
I could only hear ......your cry for help

They said that I need to be careful with you
You need help to navigate the world
You cannot take care of yourself
I could only sense ....your spirit guiding me

They told me not to have another child
For he or she may be “damaged” like you
A “burden” to this earth ..
I got ready to be blessed again ....by another just like you

To my children ..Nishant and Nivriti 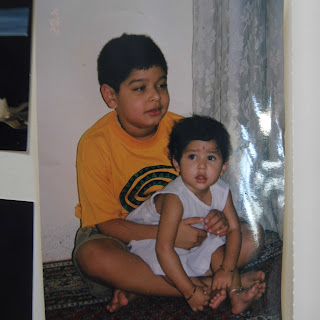 This was the moment I realized that I did not need to “Accept “  you or your Autism …for it never made a difference ..there was never a moment that I  did not accept you ..there was never a moment that I wished you were different ..there was never a moment I that I wanted away from you ..I could not imagine life without you my child ..and this realization came in the moment when I discovered your sister was in my womb and though relatives and doctors were worried and even dissuaded me from continuing my pregnancy and wanted me to do scans and checks to see if she was “okay” ,,,I firmly refused ..that moment I knew that it did not matter if she was exactly like you ..I would love her just as I loved you …she was life ..co created by me and life just is ..it is not for me to end it or decide how it is meant to be but to just live …love …and laugh  . 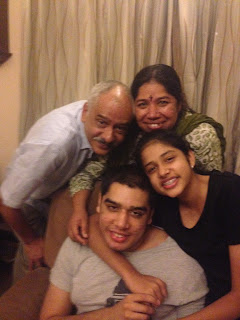 Email ThisBlogThis!Share to TwitterShare to FacebookShare to Pinterest
Labels: Poems and such...

Summary of INTERVENTIONS DONE FOR NISHANT

Speech and Language  : [Age 2.5 – 6 ,7-8 ] [Done by leading SLP’s in Bangalore ]  His speech regressed from age 2 ,  Speech therapy was in place from age2,5 ..was vocal but inconsistent regressed  his speech further at age 5  it complete stopped  as oral imitation based drills were difficult for him   [he had apraxia of speech also ].This intervention  helped build receptive language  and concepts for him

Language and Communication : [Age 6- 9 ] Systematic methods -  PECS , VB/ABA[implemented by me   using the actual manuals and some basic training]  brought initiation and some learning behavior and functional communication [thru PECS[  ..further improved by use of Technology ..Voca devices ..Clicker on Touch screen Laptop and internet resources [Age 8 – 13] and ipad based ..Avaz and Clicker6 [Age 14 onwards ]

The programs in the book “Teach me Language”  , “Do– Watch –Listen– Say “ helped a lot to build advanced language concepts and  communication

RPM : [Age 8 – current][implemented by me .. I trained under Soma ]  Improved attention considerably , brought learning behavior like sitting at table for 45 minutes , responding … helped to bring consistency with response to written choices , improved speed of spelling on letter chart and later on keyboard and ipad . Still needs intermittent prompting by   familiar partner to comfortably maintain attention and response.

OT/SIT [Age 3-6 , 13-14, 16-17 ] Early OT [Done by leading OT in Bangalore ] brought about 20 % change with coordination and planning the first time around ..Hyperactivity and sensory issues remained or heightened .Later did a lot of activities from “Out of sync Child” which helped .
At older ages[done in Coimbatore ]  OT had no effect at all.

Gym and sports training  [Privately done age 7 onwards to date ] – Built stamina , endurance ..developed cycling , walking ,,,both for 7-8 km , some ball skills [football /Basketball] but was unable to play sport in team    ..became more hyperactive with this  but regular massage helped to regulate this .

Perception enrichment program  [Age 7-10 ] [Done by OT from US who was in Bangalore or persons trained by her ] Improved visual perception skills ..he started copying drawings and doing online jigsaw puzzles etc .Later following Chalk board training [Kephart ][from a book]   he started copying and writing at age 13 .Writing is not still his preferred response mode.We did millions of pre-writing programs before this which did not impact him. Loves Art esp on computer now

Berad’s AIT -  Age  10  in CT ,USA  – Helped with bringing down Auditory sensitivity , visual and auditory stimming completely disappeared and listening to multiple voices improved .He started listening to a range of music from classical to pop ..including whatever we were playing for him from childhood .Stopped watching videos repetitively .

TLP [The listening Program ]  [8 week program  CD based ] ..Administered at age 17  ..Improved /auditory/listening considerably  ..started responding to variety of instructors and requesting for music whenever he needed to calm down [self regulation came in ]

Vision  assessment and treatment : [Age 12 ] ..by Devt vision therapist [USA]   ..was prescribed prism glasses which he refused to wear consistently .

Behavior severely regressed at age 18 transition to adulthood  .Root cause was  found to be gut issues ..when we treated for this  90% of behaviors went away. When he had stomach issues , he went through a  period  where he would get into sudden bouts of rage , shouting , severe self injury and aggression esp towards adult handling him  .He communicated through  ipad that he had severe stomach pain and was unable to regulate his rage .We helped him with medicines [Alopathic and Naturopathic ] to settle his stomach issues , diet ..reducing sugars and heavy proteins , lighter flexible schedule for activities , relaxation technique practice runs when he was calmer , Cognitive work for him to understand his body , digestion and sensory systems and Behavior etc etc . Now these have reduced to almost nil and are lower in duration and intensity and  his hyperactivity has also gone away completely . ABA based techniques, Cognitive Behavior training , Sensory diet ,were in place always
Psychiatrist had suggested to increase mood medication [he is still on a low dose  ..which we are hoping to wean off] and use restraint  but did not so as we felt it is not tackling the root cause .

Biomedical treatments :
Diet [GFCFSF] :Age[ 7- 13] – Helped to improve behavior and focus by 20% at the beginning and further improved when we did Ayurvedic treatments and some internal herbs along with it …Behavior became very manageable at age 9 ..9 – 11 he coped well in mainstream school in the US , adapted to the new environment and new aide etc Tested positive in urinary peptide test for Casein .
Still reacts adversely to heavy animal protiens and sugars

Gram + , Gram –ve , Antibiotics + Antifungal treatments [suggested by Devt Paediatrician , Hyd]  [Age 9.5] …Severe regression including toilet training went away ..we stopped after couple of months and had to use naturopathic and homeopathic medicines to recover his gut at that point  .

IV Chelation :[Age 11- 13]  ..no positive effects ..in fact probably further regression and had to be mildly medicated with Resperidone at age 12 in the US to remain in school due to mood swings and aggression .

Multiple Supplements  [including Supernuthera ,DMG Zinc ..tried almost 32 different ones ..not much effect  ]  Only Grapefruit seed extract and Probiotics seemed to help with some improvement at that point . We are currently using GSE and Probiotics  again from age 19 along with a Parasite killing protocol every 2-3 months , which includes allopathic medicines , Castor oil , Neem , Activated charcoal ..sometimes local herbs and kashayams …and it has helped tremendously with his stomach ailments and behavior

Hippotherapy :Age [9-10] Bangalore ...No significant gains but enjoyed the activity and loved the horses

Mainstream Schooling with support  :Play school [age 2-3]  Montessori age 3-7 Mainstream school in Bangalore [Class 1-3] - helped  him with early literacy skills .peer interaction  .Helped us to understand teaching goals and social goals  and work towards outcomes.In the US for first 1,5 years did well in mainstream with an aide helping him then had to be transferred to special section due to behavior issues in 6th grade . Always supplemented by my constant work with him to understand concepts through experiential learning, visuals and videos and RPM

Special School :Age 13- 17 ..Helped with learning some splinter vocational skills but communication and behavior went down and learning was maintained only by 1-1 work with me . He liked being with a group of students his age and that was a plus .

He is focused and responsible ..self regulated , follows his schedule ..works with minimum supervision with multiple adults .Communication has improved tremendously both through ipad and using gestures and body language .Social skills are good .Does computer based work [Graphics and Ms Office ]  , Lamination , Cooking .Some fatigue and laziness on some days .

100% independent ..in fact does multiple chores at home ..many without prompting example :he has taken it as his responsibility ..example bringing in the milk in the morning and keeping the packets in the fridge ,chopping vegetables ,making tea ,laundry etc..72 year old grandmother is able to manage him easily when parents are not around though he is 6 foot tall .

Adventure and travel: [Age 1-current ]We did this more often before initiation of  Amaze and he enjoyed and adapted thoroughly ..We have traveled the world by Air and in India by road and train . Of late as we  are busy as a family we are travelling less ..nevertheless enjoys himself …earlier would be super excited in a beach or mountain or with animals ..now is just okay with it  ..very adult reaction I think .

Drama for Autism : [since 16 years ]  mostly implemented by me under guidance of Dr Ram ..I have used these techniques individually and in a group sitting at Amaze with very good improvement in the areas of initiation , imitation ,joint attention social reciprocity , using the body and sounds to communicate , group skills like turn taking , waiting , following group instructions etc
Also Art , Movement and Music based techniques learnt at the Velvi festivals have helped students with engagement and exploration , general calmness and well being , learning to have fun in a group etc etc …

Technology based intervention : I have been using technology for him since age 1.5 even when he was not diagnosed he would love interactive games on the computer and I have always used it as a tool for teaching and engagement rather than as a baby sitter  .He uses technology in all spheres now …his ipad is his lifeline [Communication ], leisure tool [Music , Youtube videos[ususally cooking shows]  , Games] , uses it as a memory bag ..loves to browse old photos and videos …Computer also for literacy ,creativity and vocational skills
Posted by AKILA VAIDYANATHAN at 4:46 AM 4 comments:

Email ThisBlogThis!Share to TwitterShare to FacebookShare to Pinterest
Labels: Nishant 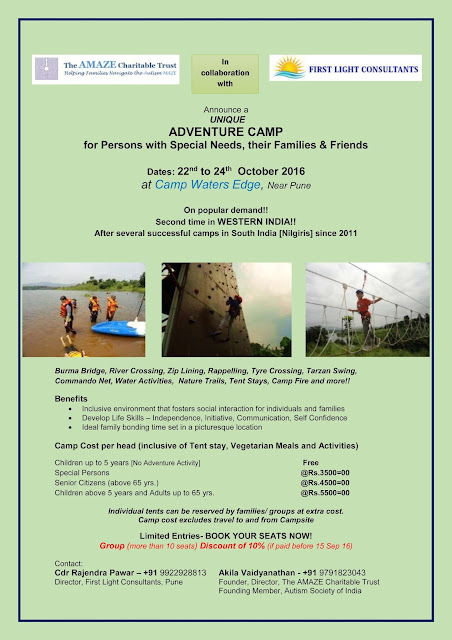 AKILA VAIDYANATHAN
Coimbatore, India
Hi !! Welcome to my blog . I am fascinated by poetry and technology , I love to explore places ,books and philosophy ,I experiment with cooking and writing ,I enjoy music , movies and dancing . I like to analyse human behavior and human learning from various perspectives ...disability , self development ,change , systems.... Founder , Director of The AMAZE Charitable Trust and Founder Member of the Autism Society of India ...being an enabler in the area of Autism is my life's mission . Mom to two amazing children Nishant and Nivriti ..I live with them and my dear friend and husband Ram and my wonderful parents @ Coimbatore ,TN ,India